Back to Games - Dark Messiah of Might and Magic 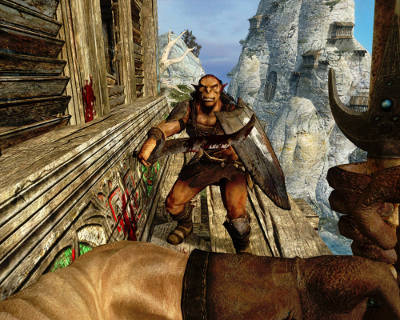 This simple configuration file alters some of the basic controls for Dark Messiah so that it is easier to play, including tap to sprint, crouch toggle and more.

- Tap to sprint. This makes it so that the sprint (SHIFT) key no longer needs to be held down for sprinting. Simply press/tap the button once and you will sprint for as long as you hold the forward (W) key down. When the W key is released, sprint will end. Simple, but effective. A lot of newer games feature this kind of sprinting, which gives your little finger a rest during periods of lots of sprinting.

- Toggle walk/crouch. This alters both the crouch (CTRL) key and the walk (V) key so that they are toggle modes, rather than having to be held down. Press once to enter the mode and again to exit. Simple as that.

- Toggle HUD. Press the Y key to toggle the HUD on or off. Useful for taking screenshots.

If you wish to alter the bindings for any of the controls, I have included all the key bindings right at the top of the configuration file for easy editing.

Use: Place this file in the same folder as config.cfg (''''mm\cfg'''' from your main Dark Messiah folder). You can then run it via the developer console (the tilde key, once enabled) by typing ''''exec enhancedcontrols''''. To run at startup add ''''+exec enhancedcontrols.cfg'''' to your command-line arguments. This is useful, since you will need to perform it every time you start the game for the WSAD keys and all other functions to work.