This is a re-post in a new subject, to keep it organised so we don't have to trawl through pages of waffle to find it.

Been putting together a 'cheatcheet', both for my own memory and to help others. I will add to this when I learn more. If I get anything wrong, or you have an additional tip, better description then please post away!

Please keep this subject tidy and on-topic. Junk posts will just be deleted without notice.

Prograde
Indicates the spacecraft's current trajectory (forwards). This is shown by a circle with 3 lines and a dot in the middle. Prograde will make your orbit bigger and achieves orbit. "Burning prograde" will raise your apoapsis (highest point of orbit). Most burns will have the most effect at the opposite end of the orbit.

Retrograde
Indicates the spacecraft's reverse trajectory (backwards). This is shown by a circle with 3 lines and a "x" in the middle. Retrograde will make your orbit smaller and achieves landing. "Burning retrograde" will lower your apoapsis (highest point of orbit). Most burns will have the most effect at the opposite end of the orbit.

Apoapsis (AP)
The point where the distance between an orbiting object and the body it is orbiting around is greatest.

Periapsis (PE)
The point where the distance between an orbiting object and the body it is orbiting around is least.

Delta-V
The change in velocity that has or can be exerted by your spacecraft. This is measured in meters per second (m/s). More mass can reduce the delta-v, while more propulsion can increase it. This makes it a useful value to calculate efficiency of launch vehicles. For example, a launch vehicle requires about 4,000 m/s of delta-v to escape Kerbin's atmosphere and achieve a stable orbit.

Asparagus Staging
The idea is that you create a rocket with a lot of parallel rocket engines with fuel tanks on top of them. All engines ignite at the same time. The trick, however, is that each rocket engine isn't depleting its own tank, but they are all draining their fuel from the two outmost tanks. When these are depleted, the outmost tanks with their engines are decoupled and the next fuel tank takes over which is still completely full. The result is that the rocket always flies with the minimum number of tanks required to transport the fuel it has left while also constantly using all engines it has on board. Detailed description here.

Zenith
"Up" in ground-relative coordinates, i.e. the direction your rocket points at when at the launchpad, aka: "the highest point in the sky".

Nadir
Opposite direction of "Zenith".

Good call this will come in very handy.

KSP is a complicated game not something to pick up in an hour or so.

If i ever have anything to add i will but i think you are way ahead of me on this.

KSP Wiki: Full of information and tutorials to help you out in KSP.
Basic Maneuvers: Contains some really helpful basic information - like how to efficiently get into orbit etc.
Docking guide: Some help with docking, including a walkthrough video.

Key Bindings: The default controls for KSP.
Transfer Orbit Calculator: Handy for going further than The Mun or Minmus.
Maneuver Nodes
: A video walking you through the basics of maneuver nodes.

Crazy i was just looking at that page online trying to figure it out! 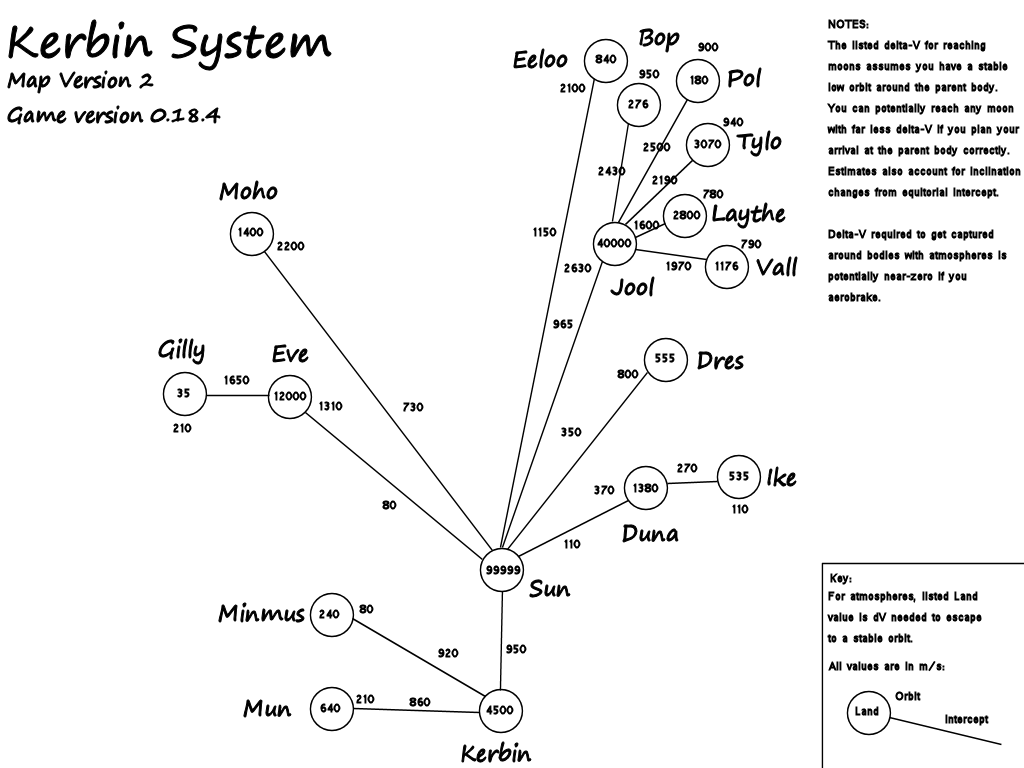 : A diagram showing the various amounts of Delta-V required to get to planets.
Drawing Board: A comprehensive list of guides, help, tutorials etc.